PRAISE TO THE DICE GODS! 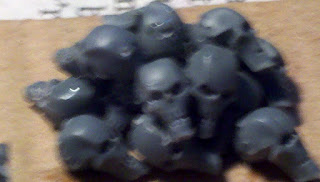 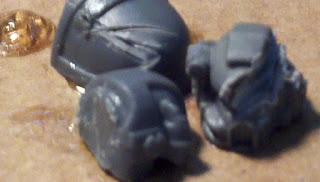 Oh mighty dice gods, look upon this offering kindly. Grant me high rolls when I need them and low ones when I don't. This offering shall be painted in the colors of my enemies!
Posted by thebob489 at 1:04 PM 1 comment:

Hey folks sorry for the lack of new posts this week. I just got back from some Gaming over at Packard's in Morristown, TN and I will be writing up a quick and dirty battle report for it and a game I played Saturday against a Blood Angels army.

Hey guys. The names edwin. You can call me madival. I am a new contributer to this page. I will be bringing battle reports to this page. Video reports such as the below. Enjoy. Its the game Edwin Versus theBob. footcrons versus  Deathwing.

More reports to come.
Posted by Edwin at 6:29 PM No comments: 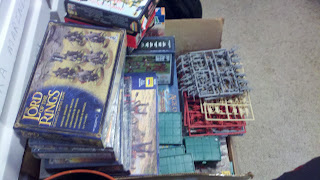 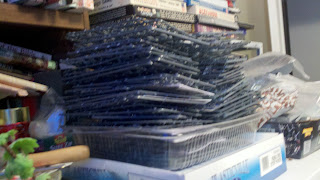 I post these pictures as a cautionary tale to those who may be considering getting in to miniatures gaming. The top picture is but a fraction of the massive pile of  yet to be built 1:72 scale miniatures. The grey sprues are a mixture of line, grenadiers, and skirmishers for the Peninsular War during the Napoleonic Wars. Underneath them are Spainish partisans from the same period (cream colored sprue). Finally we have British line infantry also from the same period. Mixed in is a box of Lord of the Rings Morhul Knights and an Eldar Guardian squad (amongst many other things). This is what happens when you get the hobby fever (there is no known cure). Though I will give credit to my old man who has been dilegently tackling the great yet to be built piles of 1:72 Vikings and Saxons and has made good progress. My old man has been war gaming longer than I have been alive and he has the collection to show it. Many hours have been enjoyed playing with his old Airfix 72s.

The bottom picture is the current pile of uncleaned sprues. This is a hodgepodge of Guard, Wolves, Marines, Tau, and god only knows what else. Typically all bits are stored in sandwich bags according to army. These are just waiting to be cut and stored. The bits box itself is getting rather full these days so it may be time for another wild converting spree (human Chaos infantry for 40k most likely). 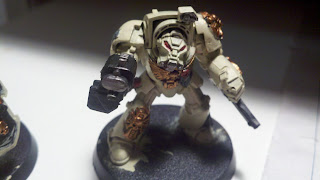 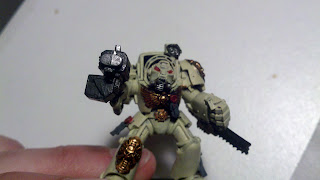 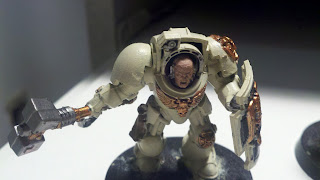 In keeping with the previous post's theme of Dark Angels here are some work in progress Deathwing. I haven't worked on them in a week or two as painting all that Bleached Bone makes drives me crazy(er) after awhile
Posted by thebob489 at 10:16 PM 3 comments: