Yes, I know this first impressions article is very late to the party, but frankly I haven't really given a damn about 8th edition until it started to be played regularly at the local shop. The new lore is frankly atrocious on many levels. Read any of the works of Dan Abnett, Graham McNeil, or the notorious ADB then read the new fluff and weep. That is a topic for another rant though. The rules didn't make a very persuasive case to drop a couple hundred dollars on new books either. The death of Warhammer Fantasy has very much poisoned me to GW releases and the cluster fuck of 8th didn't help that.


So what changed? Well, new Kill Team for one. The 7th ed Kill Team has been my defacto game for the weekly game night for the most part so the new rules looked good. We have also had some new blood at the shop who have wanted to play 40k so there have been actual games of 40k played for the first time in a very long time. So crappy fluff be damned and let the dice roll again. Recently Da Masta Cheef asked if I was up to an intro game knowing that I had finally given in to the new edition and I accepted the challenge. The Dark Angels would face the Rainbow Warriors in a 1000 point matched play game. Here are some of my thoughts on my first game of 8th. 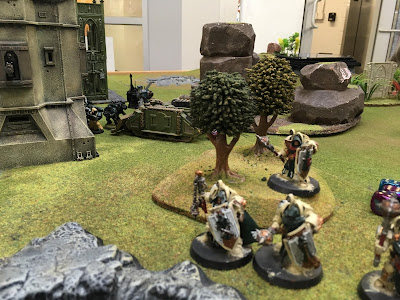 Ways to Play and New Books
First of all, the new codex layout can kiss my ass. Trying to make a traditional army using only the book is a pain in the ass of page flipping and useless entries. Want to play 40k with points and force organization? Back of the book, kid. While I do appreciate the desire to add in more "casual" ways to play, the open play and power level based games just seem sloppy at best and ripe for exploitation at worst. I don't see myself ever playing these or using them to teach new players so I won't give them more thought.

New Stats
Meh. All they really did was make AP like Strength was in Fantasy by modifying armor saves and making Initiative redundant. The rolls needed for WS and BS are the exact same as the traditional values/charts. Leadership seems to have been lowered across the board to accommodate the unwieldy morale phase. Vehicles becoming creatures more or less is a very mixed bag. On the one hand, I do like the degrading mechanic as a vehicle loses wounds, on the other the removal of anything resembling a "realistic" damage mechanic is annoying. Look, I get it. Having your Land Raider or other big shiny tank go poof in one round of shooting sucks hard. The walker and monstrous creature mechanics for things like Dreadnoughts and Hive Tyrants never made much sense either. Is making them and tracked vehicles all the same the solution for this? No. Hull points for vehicles felt good enough. You could absorb a few hits without getting one shot most times, but if a tank got hit with a dedicated anti armor weapon from the side or rear you were going to pay for it. That is how armored vehicles should work in a game based mainly around infantry.

Characters
Welcome back, HeroHammer (sort of). Rather than reward smart placement of your important characters and leaders you get a catch all ability to not be targeted unless you are extremely clumsy and let your commander wander out front. Again, meh. The separation of Guard characters from command squads is a fairly large pain in the ass to my army though.

Strategems and Command Points
Yo, dog. I heard you like to re roll 1s. So for the sake of simplification GW decided to make us pay for unit abilities that we used to get for free? In the context of the new rules these seem to be very strong motivation to make a battle forged army. It will take more games before I can decide if I like these or not, but they can certainly tip a turn or round in your favor if used correctly. Deathwing Assault for example lets my terminators dish out an obscene amount of fire when they teleport onto the table, but they used to be able to do that without having to pay for it.

Close Combat
Now here is a change I actually like. Charging units attacking first just makes sense and feels natural. I do also enjoy being able to use heavier weapons like power fists without having to go last.

Conclusions
In a word: meh. Not the best edition and not the worst. My first impressions are very underwhelming. More games will help shape a more nuanced understanding of the new rules and such, but I have a sneaking suspicion that 9th will be out before too long to serve as the $300 FAQ much like 7th was for 6th. With Kill Team just launching my enthusiasm for things 40k has yet again been rescued. More on this later. Until next time!
Posted by thebob489 at 7:00 PM